Bonded post-tensioned concrete is the descriptive term for a method of applying compression after pouring concrete and during the curing process (in situ). The concrete is cast around a plastic, steel or aluminium curved duct, to follow the area where otherwise tension would occur in the concrete element.

When the tendons have stretched sufficiently, according to the design specifications (Hooke's law), they are wedged in position and maintain tension after the jacks are removed, transferring pressure to the concrete. The duct is then grouted to protect the tendons from corrosion. This method is commonly used to create monolithic slabs for house construction in locations where expansive soils (sometimes called adobe clay) create problems for the typical perimeter foundation. All stresses from seasonal expansion and contraction of the underlying soil are taken into the entire tensioned slab, which supports the building without significant flexure.

Post-tensioning is also used in the construction of various bridges, both after concrete is cured after support by false work and by the assembly of prefabricated sections, as in the segmental bridge.

Among the advantages of this system over unbonded post-tensioning are:

* Large reduction in traditional reinforcement requirements as tendons cannot de-stress in accidents.
* Tendons can be easily "woven" allowing a more efficient design approach.
* Higher ultimate strength due to bond generated between the strand and concrete.
* No long term issues with maintaining the integrity of the anchor/dead end.

Unbonded post-tensioned concrete differs from bonded post-tensioning by providing each individual cable permanent freedom of movement relative to the concrete. To achieve this, each individual tendon is coated with grease (generally lithium based) and covered by a plastic sheathing formed in an extrusion process. The transfer of tension to the concrete is achieved by the steel cable acting against steel anchors embedded in the perimeter of the slab. The main disadvantage over bonded post-tensioning is the fact that a cable can de-stress itself and burst out of the slab if damaged (such as during repair on the slab).

The advantages of this system over bonded post-tensioning are:
* The ability to individually adjust cables based on poor field conditions (For example: shifting a group of 4 cables around an opening by placing 2 on each side).
* The procedure of post-stress grouting is eliminated.
* The ability to de-stress the tendons before attempting repair work.[3] 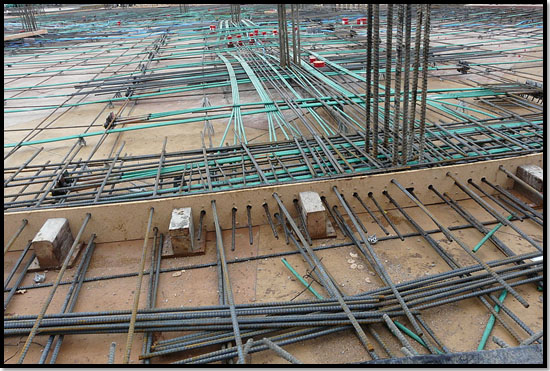